Christopher Alexander, perhaps the single most effective polymath architect of his generation, has died at the age of 85. Through teaching, writing, building, inspiring technology, planning, and even delving into theology as well as pedagogy and aesthetic theory, Alexander created, over six decades of relentless creation and research, a legacy whose breadth and complexity are difficult to apprehend.

Alexander was first and foremost a world-class academic, studying at Trinity College, Cambridge University, in chemistry and physics, and earning degrees in architecture and mathematics. He received his doctorate at Harvard, the first awarded by the Graduate School of Design, while working at the Massachusetts Institute of Technology.

Alexander received an astonishing number of awards, both for his research and for his architecture: the first Medal for Research given by the American Institute of Architects; member of the Swedish Royal Academy of Arts; the Best Building in Japan Award; the Association of Collegiate Schools of Architecture Distinguished Professor Award; Fellow of the American Academy of Arts and Sciences; the Athena Award, given by the Congress for the New Urbanism; the National Building Museum’s Vincent Scully Prize; a lifetime achievement award from the Urban Design Group; and many others.

Alexander was a professor at University of California, Berkeley, and at the Prince of Wales’s Summer Schools in Civil Architecture, and initiated the process that led to the international Building Beauty postgraduate school for architecture, which launched in Sorrento, Italy, for the 2017–18 academic year.

His writings were equally extensive and diverse: Notes on the Synthesis of Form (1964), A City Is Not a Tree (1965), The Oregon Experiment (1975), the seminal A Pattern Language (1977), The Timeless Way of Building (1979), and the four-volume The Nature of Order (2002-4). The titles for the four-book set merely hint at the sheer expanse of Alexander’s range: Book 1: The Phenomenon of Life; Book 2: The Process of Creating Life; Book 3: A Vision of a Living World; and Book 4: The Luminous Ground. 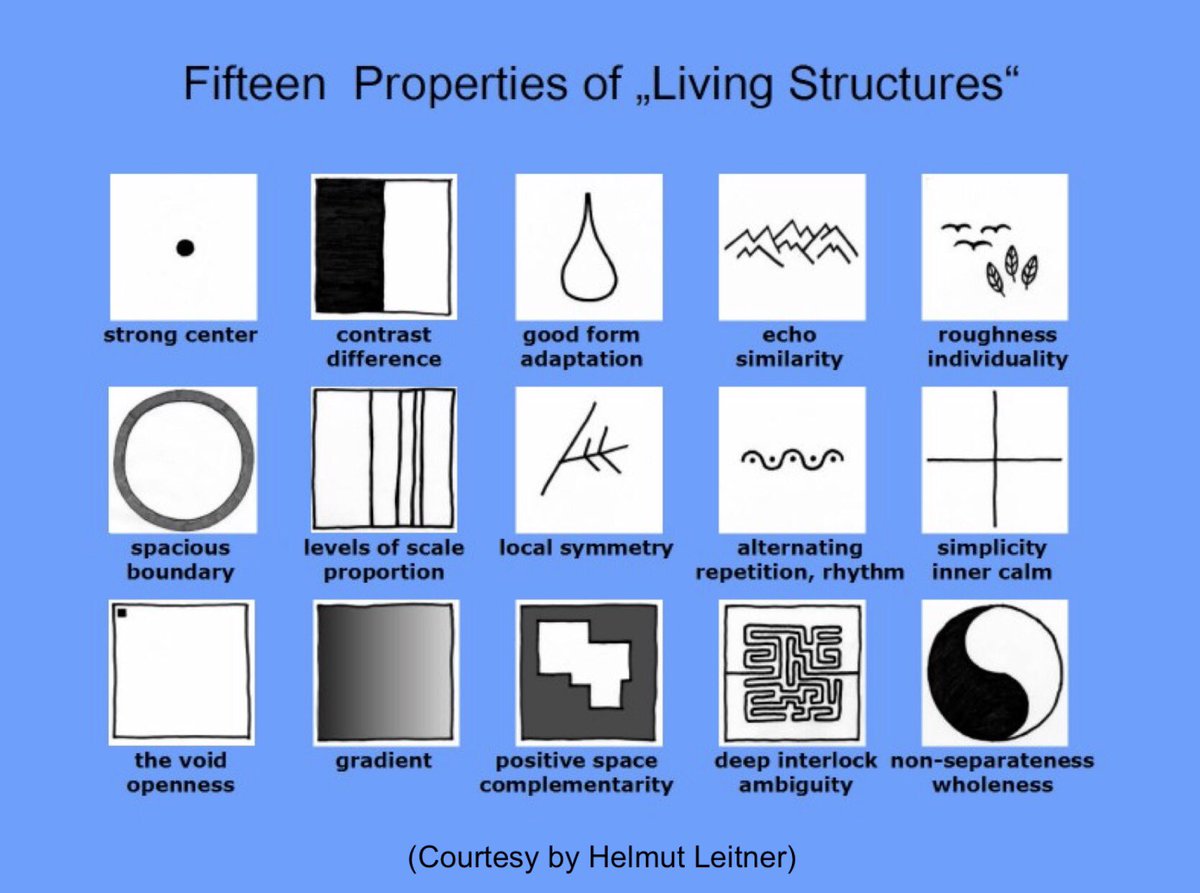 When Zaha Hadid died, images of her buildings and parametric simulations abounded—a celebration of a fine-arts sensibility where aesthetic vitality overwhelmed any attempt at trying to understand the cultural or even intellectual basis beyond pure expression. In contrast, Alexander’s passing reveals the complexity and sweeping ideological and social intentions of a holistic vision of design, one that attempts to embrace all of the realities of the human condition.

Alexander’s ideological, cultural, and intellectual basis for a complete openness to the humanity of architecture and design is unique in the fine arts–obsessed world of architecture. Like Charles Moore, Alexander’s energy and enthusiasm attracted scores of co-conspirators from across the ideological spectrum: Rem Koolhaas; Andrés Duany; Bill Hillier; theorists like Stewart Brand, author of How Buildings Learn and The Whole Earth Catalog, and Ward Cunningham, who developed the first wiki, as well as Will Wright, who designed SimCity and The Sims. Pattern Language, in particular, influenced software designers and programmers. Musicians including Peter Gabriel and Brian Eno were also equally inspired by Alexander’s theories and practices.

It is easy to get lost in the realized complexities of discourse Alexander spent his life defining, and then manifesting. His writings are fully wrought, as is the scope of his consideration. They dealt with every aspect of the built world.

Alexander’s life touched many, deeply and personally. Architect Susan Ingham of Seattle, who co-founded the Building Beauty program with him and others, wrote this personal note:

“It was difficult for me to conjure up a compelling design ‘concept’ that would somehow add deep meaning to my projects, and design development decisions seemed to be based on whatever looked ‘cool’ and clever. I was grasping at ideas and concepts that had no inherent meaning to me, nor meaning for the place or people for whom I was designing. … Alexander taught us how to search for beauty—how to identify it, how to create it, and how to savor it. In his view, beauty is not idiosyncratic, but is something that we all share within us, and that connects us intimately to the beauty of our world and the universe. Creating beauty is a celebration of life—the life within each of us, as well as the life of our culture, our environment, our world.”

Michael Mehaffy, who partnered with Alexander on many projects, says his mentor’s legacy had a revolutionary perspective: “The leaves don’t ‘make’ a tree. In fact, the tree makes the leaves! There is a constant process of adaptive differentiation, and this gives rise to new forms, through a process of morphogenesis. This is going on all the time in healthy structures, and healthy environments. As planners and architects we can either support this kind of process, and support life, or we can choke it off, and create dead places, and dead structures.” But Alexander’s widow, Maggie Moore Alexander, thinks his own words say it best, from his last book, Battle for the Life and Beauty of the Earth: “Again and again we are confronted daily by decisions, by the question, ‘What should I do, what path should I take, how should I approach this problem?’” Alexander believed—knew—that the answers lay in one simple truth: “Love itself! …The ecology of humankind is created by the fabric of buildings, by the human fabric of affection, and by the powerful force of our love for our earth—love, even for the smallest pebble.”

Architecture is a profession that projects the control of the designer into our culture, where innovation is the metric of success. But Alexander knew that “the most tender wakefulness lies in your heart, and gives you the only realistic picture of the world.” A simple truth from a complex polymath. Rest in peace, Christopher Alexander.