Just down the Mississippi River, past the hustle and bustle of the French Quarter, you’ll encounter the Marigny, the most intact and architecturally diverse historic neighborhood in New Orleans. A 15-minute walk from my home can pass by residential, commercial, and industrial buildings that span eras and construction methods, with simple structures next to unique landmarks, all forming a rich urban fabric. In a single block I can travel back in time 100, 150, even 200 years. As an architect I’m regularly inspired—even after living around here for a decade—and feel lucky to call it home.

The neighborhood dates to the early 1800s, with the historic term of the Creole Faubourgs, suburbs that developed as the young city grew along the higher natural levee of the river. The area welcomed diversity from the start. Drawn to riverfront jobs, many early residents were skilled builders and tradespeople, especially immigrants and free people of color. Generally working class until a few decades ago, the district remained intact through preservation by neglect—also a testament to durable, well-constructed buildings suited for their climate (think of how many hurricanes they’ve been through). Impressively, most of the architecture is still used for its original purpose. But even as a remarkable collage of history, the area faces issues like any other major city neighborhood: a lack of affordable housing, worsened by relatively intense real estate speculation that’s displaced residents; rising rents and home prices; and noticeably shifted demographics, along with recent generic new developments that threaten the local character. Two centuries later, the neighborhood remains walkable and mixed-use, feeling less like a history exhibit frozen in time and more like a living, vibrant place that continues to evolve.

A technical note: Local geography matters, so I’ll clarify that I live in the far corner of the Marigny neighborhood and took most photos around there, and also captured parts of St. Roch (pronounced “rock”) and the Bywater (which others call the Upper Ninth Ward). We can get into the local parlance of words like “lakeside,” “front-of-town,” and “downriver” another time. The pandemic may have canceled traditional Mardi Gras events this year, but locals showed inherent creativity and resilience in a new custom: decorating their own houses like parade floats. These colorful installations celebrated everything from politics to local culture to whimsical creatures, and brought out the city’s innate social energy. Locals know how to set up a party in just a few square feet, extending their homes outward: onto the front stoop, porch, or sidewalk, and into the street. Combine furniture, drinks, and good neighbors, and gray pavement becomes a place of revelry. For over a year we have gone without festivities—which help to balance out the heat, humidity, and hurricanes—and are eager for the neighborhood parades, second lines, and crawfish boils to return soon. Reasons for their evolution abound, but these distinctive houses without hallways are ubiquitous as the dominant historic housing type in New Orleans. A resourceful use of materials, shotguns are an effective solution for building on long, narrow lots, with overhangs that keep the space between private home and public space shaded and dry, and are elevated a few feet to avoid floodwaters and pests while circulating cooler air underneath. The ones here were likely constructed at the same time because they share identical architectural features, from the siding to the doors and windows to the detailing on the trim and brackets, as well as the porch, ironwork, and steps. Right on the sidewalk, they are front-facing and sociable, like many locals. This is a corner where I feel like I step back in time. These store-houses are close to the ground and have living quarters above, with archways, balconies, and iron galleries distinguishing them as mixed use commercial buildings (and the most recent one in view was built during the Civil War). I like to imagine long ago residents scurrying in through the tall doors just before shopkeepers close up for the night. Many historic corner-store buildings are scattered throughout the neighborhood, standing next to houses or other commercial structures. These businesses originally served nearby residents, and still do. Unfortunately, in most cities across the country, this mixture of small commercial with residential has been restricted or even eliminated due to homogenized zoning or redevelopment. Within walking distance, every few blocks a bar, restaurant, or coffeeshop appears, along with grocers and other small retail. Large openings show what’s inside and mark the entrance (or where to order takeout in pandemic times), with French doors and shutters to bring light and air in or keep the elements out. Sidewalks, as well as the street, provide just enough room for outdoor seating at an intimate scale, and the architecture fits in with surrounding buildings even while accommodating a different use. A few blocks away, the historic commercial corridor of Saint Claude Avenue is the area’s backbone, a main thoroughfare for vehicles, cyclists, and pedestrians. With much of its 19th and early-20th century architecture intact, the street retains a scrappy, energetic character today. The colorful mix of eras, building types, and retail offer a variety of local businesses that serve the diverse area (though, sadly, several have closed during the pandemic). Historically, the wide street has also acted as a boundary, dividing neighborhoods and demographic groups. 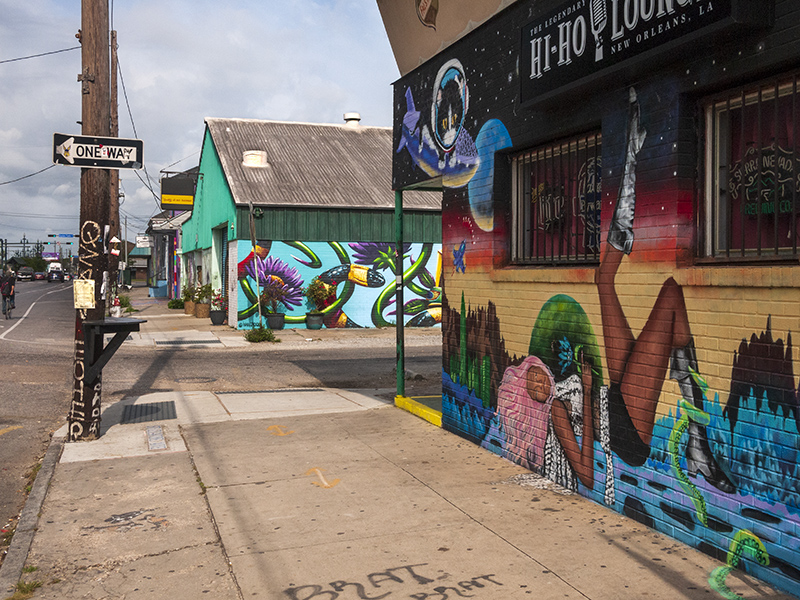 Also on Saint Claude Avenue, colorful murals are part of a recent effort to create public art on structures across the city. Paint and imagination enliven large walls of nondescript buildings while reinforcing the area’s reputation as a place for creative, artistic people. The vibrant designs and figures also remind me of the street life that’s been missing during the pandemic. The creative spirit lives on in residential blocks, where this installation makes a whimsical gateway and small gathering spot. A friend who lives nearby said this intervention has accumulated over time: tabletop and barstools first, then growing until we end up with a mirror, chandelier, disco ball, string lights, and colorful fabric, plus a gold traffic cone in case the party spills into the street. This house represents neighborhood spirit: a ubiquitous double-shotgun that’s been cared for, covered in bright colors, with plenty of personality in the decoration, political signage, and plants. A neighborhood sentinel for almost 150 years, the Saint Roch Market is a landmark and the only remaining historic market building in the city outside of the French Quarter. The structure is built on a strip of land between two one-way roads, where a neutral ground (or “median” everywhere else) would typically be. Originally an open-air market, it was later enclosed and then renovated by the Works Progress Administration during the Great Depression. Shuttered for almost a decade after Hurricane Katrina, the market eventually reopened as an upscale food hall. Some blocks behind the market (and the limit of my 15-minute radius), the Saint Roch Cemetery is a neighborhood within the neighborhood. This final resting place first served a historically diverse Catholic congregation, whose priest built an elaborate Gothic chapel in gratitude for his parishioners surviving yellow fever outbreaks after the Civil War. It’s a charmingly ornate necropolis in the heart of the living city. Stretching down a narrow swath along the Mississippi River, Crescent Park collages remnants of historic infrastructure and the present-day working waterfront. The linear park is the culmination of a long-term effort to make the river more accessible for recreation as industry has decreased. Bounded by an active railroad, the walls of historic wharf buildings, skeletons of docks, and frames of metal warehouses are layered together with flexible spaces that accommodate different activities. Thoughtful landscape design includes trails for walking, running, and biking, bordered by a hardy selection of plants for the semitropical climate. This well-used park is a valuable public space, even more so during the pandemic. A rail line cuts through the neighborhood, which used to serve travelers in addition to riverfront industry. More than a physical divider, it was also the site of a major civil rights event. In 1892, Homer Plessy, hoping to challenge racially segregated facilities, boarded a train and sat in the whites-only car, and was arrested. The resulting landmark U.S. Supreme Court case backfired, ruling that “separate but equal” facilities were legal. The marker in the foreground commemorates the event. Across the tracks, a contemporary movement continues through activist art at Studio BE, led by artist Brandan Odums. Following the credo of “Art Has Power,” impressively detailed large scale paintings depict civil rights leaders and vivid portraits of Black people. Gray pavement and metal buildings are the backdrop for colorful and inspiring art, appropriately located near an important site in history. This scene captures the spirit of the neighborhood at its best: people chatting on front steps, a group walking to a bar or restaurant, a mix of building types from different eras, all in the golden glow of sunset. Oriented to the street, the architecture is designed for socializing. Over 200 years later, people value this built environment because we can fundamentally relate: it’s walkable, mixed use, and has carefully designed proportions, materials, and scale, which together create a unique sense of place. I bet it’s resilient enough to be around for another 200 years.

Two books refreshed my memory on some historical details, and are also great overviews of the neighborhood and city: New Orleans Architecture Volume IV: The Creole Faubourgs by Roulhac Toledano, Sally Evans, and Mary Louise Christovich and Geographies of New Orleans: Urban Fabrics Before the Storm by Richard Campanella. All photos by the author. This is part an occasional series of photo essays on how people have rediscovered their cities in a time of pandemic. We invite you to share images of your neighborhood. Contact Martin C. Pedersen at martincpedersen@gmail.com.